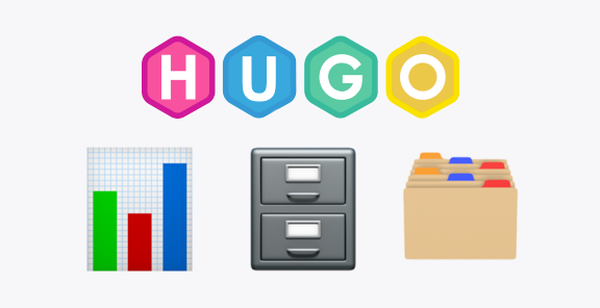 Hugo and Data: The Basics

Hugo is built with Go but as users, we only get to modify template files using Go’s templating language: Go Template. Go Template concepts are different than its more commonly used counterparts and can be intimidating for new comers.

This article addresses the basics of the language, along with some critical functions Hugo offers to complement it. If you’re starting your Hugo journey, or simply feel like several concept remains obscure to you after years of Hugo, this useful recap is for you!

Initialization is simply the first time we store anything into a variable. Here we initialize the variable:

This will mostly be used in the context of a conditional “overwrite.”

There is only one kind of loop in Go Template, its called range.

Above the dot holds the value at cursor. So ranging on a list of strings, like say, names of gentleman forming a band, that dot will be their name.

Go Template only knows if and if else as conditionals proper. Everything beyond them are functions in Hugo.

Above, if is the condition, and eq is a function (short for equal) which takes an infinite number of parameters. It compares the first parameter with any of the subsequent ones.

If $gent is either equal to “John Lennon” or “Paul McCartney” we have a Beatle!

Hugo sports several other “comparing” functions. Unlike eq they only take two parameters. The first one would sit on the left of the operator, the second one the right.

Just like comparison, or and and are also functions. They take two parameters whose value will be evaluated.

Above we’re using the and function to test two conditions. Those conditions are using in which tests if a given substring is contained within a string.

With, the other condition

Another useful action in Hugo is with.

It is followed by a function or a variable whose value is evaluated. Upon success, the code inside with is executed, and, the context shifts to the successfully evaluated value. It can take an optional else to be executed upon failure. Note that the context does not shift on failure.

Context shifting in Hugo cannot be covered in one paragraph. For a more detailed article on one of the most useful, yet puzzling Hugo concept you should give a read to Hugo, the scope, the context and the dot by yours truly.

A word on Go Template

By now you will have noticed some peculiarities with the Go Template syntax.

1. Function parameters are not delimited by commas or wrappped in parenthesis like most languages.

Now if you are to include functions as argument, then you wrap them in parenthesis like so:

3. Some actions shifts the contet.

Shouldn’t eq $gent "John" be wrapped into parenthesis?
No necessarily. Because if is at the root of your curlies, Go Template can perfectly identify it for what it is, while still properly evaluating the following word and its potential followers as a function and its arguments.

Strings are very important when dealing with templating. We’ll need to format them or transform them a lot. One of the most useful function will be printf. It takes an unlimited number of parameters. First one is a string wich includes “verbs”, subsequent ones are any variables or else whose value needs to replace the “verbs”

Above we have a sentence whose verb %s will be replaced by the value of our $gent. Note that the verbs must match the type of the variable value. Here is a list of available verbs.

Another useful printing function is print. This one does not use any verb, it just takes a infinite list of parameters and concatenate their values.

Hugo can use many types of numbers, integer, floats etc… Just like for conditions, their computing is made through the use of functions. First parameter sits on the left side of the conventional operator, second parameter on the right side.

These are just the basics but more are available for advanced usage.

You can keep on learning with the next article Hugo and Data: Advance manipulation with Slices and Maps which goes deeper into Go Template and Hugo by manipulating its more advanced data types: Slices and Maps.